Specially for my foreign colleagues and simply for all lovers of flowers.
Hand-made miracle.
Author – Svetlana Lunin
Translation – Yuri Druzhbinsky 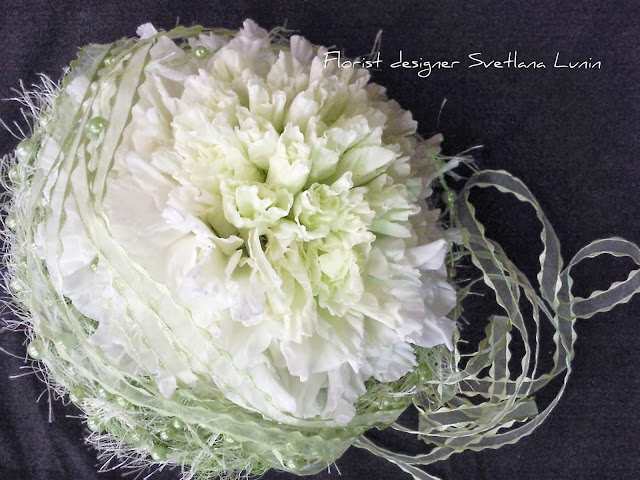 The original design and performance of Svetlana Lunin

I always look at the wedding bouquets of my colleagues (usually from and big Russian cities) with admiration and even a drop of envy. Their works impress me with the abundance of different types of flowers, wide selection of varieties and shades. High demand for flowers in those cities and countries, as well as their huge market, enables wholesale companies to buy products of the fantastic variety. In its own turn, it provides to a floral artist the opportunity to create such wonderful bouquets. Almost limitless possibilities of choice – that is the dream of every florist!


But not every floral artist is lucky enough to enjoy such a situation.

In the shops of at any level and any location the assortment of flowers comes closely to the level of ordinary Russian or Ukrainian store located far from major wholesale flower bases. Several species of the spray chrysanthemum, lisiantus, lilies and roses, a half-dozen of types of complementary flowers, poor assortment of greenery – that’s all what is available for the everyday work. Looks familiar? I am afraid so.

A peripheral Russian or Ukrainian shop as well as a very good Israeli store can’t afford to have in stock a huge number of species and varieties because it just won’t be able to sell them. If your country is evergreen and flowering abundantly at any season you may accept the fact that demand of flowers will be very modest. We are not , where the burning yearning for everything which is green and living throws a customer into the open arms of a florist. We have to be limited to the bare essentials.

But! Wedding is always a wedding, people get married everywhere, and every bride, regardless of where she lives, wants her bridal bouquet to be the best ever…

You can, of course, try to order flowers in advance – in accordance with the chosen color scheme. However I have a steady impression – which is a result of the personal experience – that the color-blindness (inability to distinguish colors) is a professional disease of the flower suppliers. The flowers you receive will match the colors which you have agreed with the customer about only in the case of the rarest good luck. To take a chance to order a dozen of kinds of flowers with subtle color transitions you must be an incorrigible optimist.

Therefore probably one of the most popular themes in the work of a floral artist is a bridal bouquet composed of only one or two kinds of flowers. The most basic version of this is a very widely known combination: roses with gypsophila. But this extreme has its opposite. From the same minimal number of flowers with a variety of additions, both living and non-living materials, you create  wonderful fantastic flowers – glamelias.

Originally, the word "glamelia" meant a specific kind of bouquet which had arisen not nowadays. The name indicates that from the petals of a GLAdiolus it’s created a flower-like bouquet of a caMELIA. These two syllables made the name – gla-melia.

Today it’s accepted to call a glamelia any man-made flower which is made of elements, parts of flowers or plants. 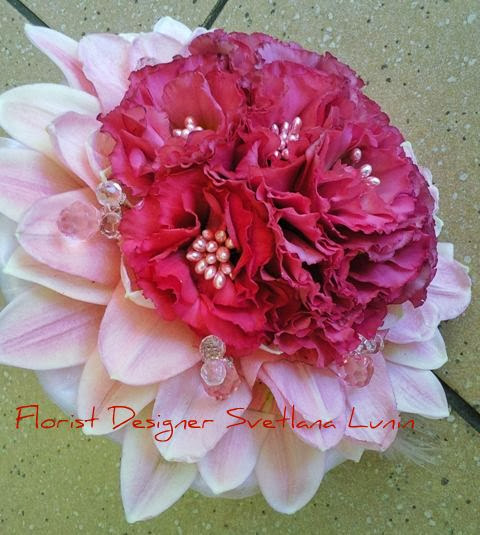 The original design and performance of Svetlana Lunin 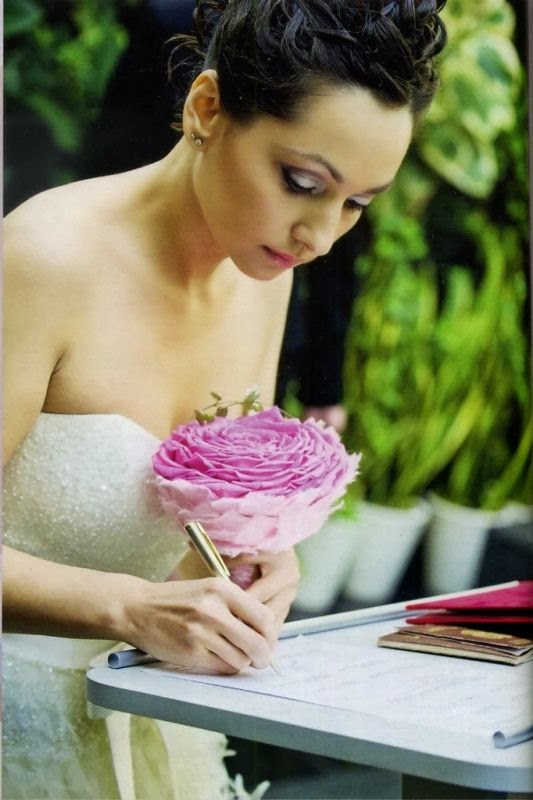 The original design and performance of Ekaterina Krapivina

Now the assortment of such unusual bouquets seriously extended; such works are now made of alstroemeria, anigozantos, callas, gerberas, orchids, a variety of leaves and even of the tiny petals of ornitogallum.

With all the uncomplicatedness of the material, the getting of the desired result turns out not to be easy at all. If you have enough imagination and talent you can even get first place in the category of “bridal bouquet” in the Floral Design World Cup competition. That’s what Japanese Yoko Takahashi did in 2002, having surpassed in this kind of competition even brilliant Per Benjamin, who then became a world champion. 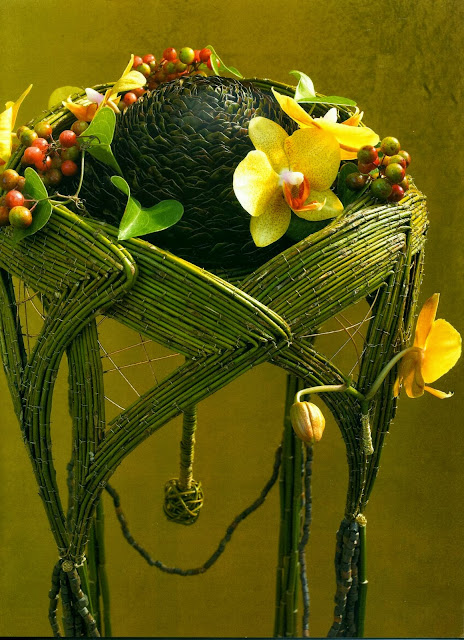 The original design and performance of Yoko Takahashi
At the 2007 European Cup a floral artist Neil Whittaker from the used the idea of a glamelia in order to create a bouquet which according to the rules of the competition should not contain any flowers except of carnations. 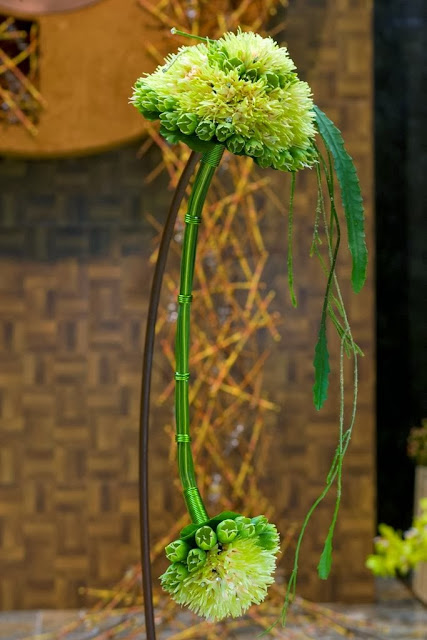 The original design and performance of Neil Whittaker
By the way, Jouni Seppänen of , the current winner in the category of “bridal bouquet” of the 2010 Shanghai World Cup, is also a great admirer of glamelias. His book “Innovations” is full of truly king-size examples of this type of work.

The last example, but not the least one: the winner of the bride's bouquet class of this competition, Stein Are Hansen of Norway, also a devoted admirer of glamelias. He created a huge flower, resembling both a chrysanthemum and a lotus, of the individual flowers and the petals of chrysanthemums, orchids and leaves of a guzmania in the yellow-gold spectrum, with a long tail ending with a bracelet, worn on the hand of the bride.

The original design and performance of Stein Are Hansen 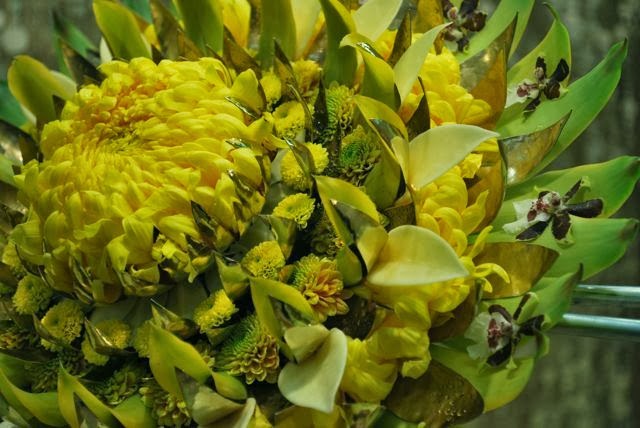 The original design and performance of Stein Are Hansen

So, here our story gets to the most interesting point. In a bouquet which consists of a lot of different flowers and sparkling variety of shades and textures almost any additions seem superfluous; but in a monotone by it’s structure and often monochrome glamelia the additions are able to bring us an ideal opportunity to adjust a bouquet into the bride’s individual image and style.

And the very same glamelia with other additions can be either regal luxury or extremely natural. The space for an artist’s creativity florists is truly boundless.

The Israeli wedding industry as a whole is strongly inclined to excessive luxury and decoration. Lots of crystals, pearls, lace, and various ornaments dominate so habitually that in a bride's hands any of bouquets, even a very interesting and natural one but free of these additions, will seem strange and inappropriate.
As a florist I have to take into account all these considerations in order to perfectly fit to the bride’s image created by stylists and help make the wedding unforgettable.
By the way, glamelias can be not only a wedding bouquet, but also a usual gift; in addition, they often are used in the design of celebration halls and vehicles. In they are also widely used in funeral floral design. 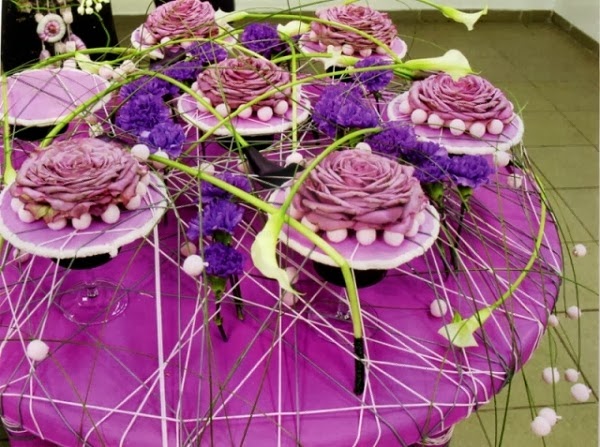 The table decoration. The international school of floral design “Nicole”.


The lifetime of the glamelias is very different - from one day to two weeks (according to my experience), and depends on what flowers are used and what technique is chosen for the job. 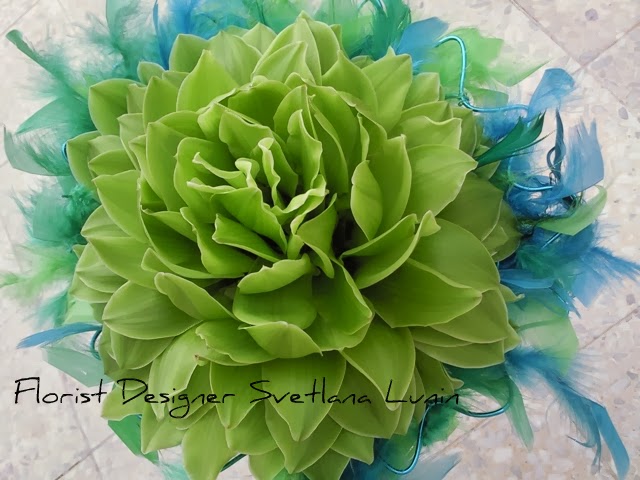 The lifetime of this glamelia which is performed of cymbidium petals in my own original   technique is about two weeks.

However it is possible to do more long-living works, if using stabilized flowers (for example, stabilized rose petals). Such long-living, virtually weightless works of an interesting decor, made from the petals with the jewelry-like preciseness, have caused a boom in popularity in . There it’s accepted to embroid with such works literally everything - from homes and offices to dolls and brides. 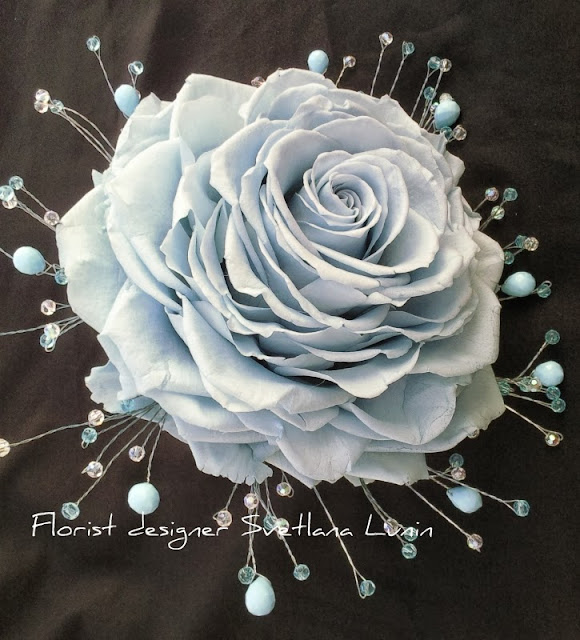 The bouquet from preserved roses of the “Verdissimo” company

The last but not the least, my dear colleagues. Except of being extremely practical and versatile, except of allowing you to create bouquets in any style with minimum cost and hassle with ordering of flowers, glamelias are also terrific fun to do. Invention of new forms and combinations of petals with leaves, feathers, fur, sequins, beads, jewelry, and various decorative elements of the most diverse forms and techniques is like a fascinating children’s constructor game.

I highly recommend to those who didn’t do yet such works, to try it and to see how great it is!

Good luck to everyone! 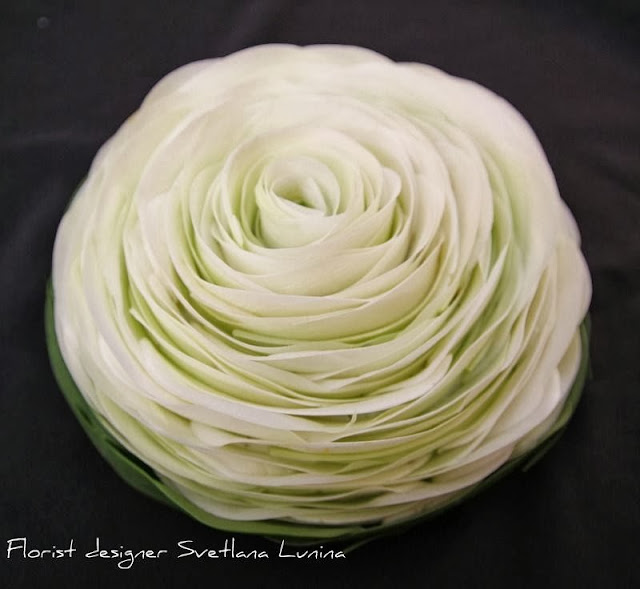 The work of Svetlana Lunin, also of the original author’s design. 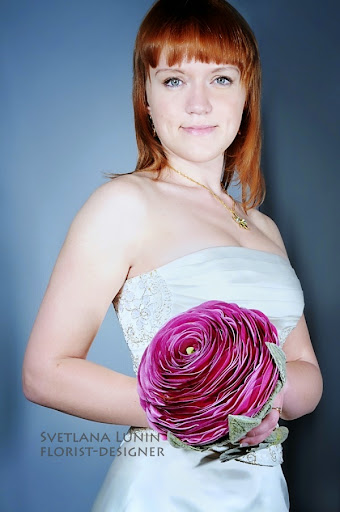